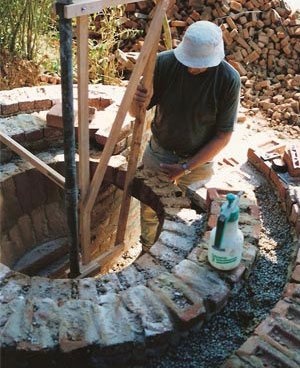 A limekiln is an industrial structure of medieval to Victorian date used for burning limestone, chalk, or even oyster shells to make quicklime for building and agricultural purposes. Generally comprising a circular, square or rectangular pit, usually between 1 and 5m in diameter and up to 3m in depth, in which the lime was fired using timber, charcoal or coal as fuel. At the base of the pit there are often one or more drawholes or stokeholes, through which the fire was lit, fed, and the ashes and lime extracted.

Much of the structure of the 19th C kilns were in generally sound condition although there were areas which needed to be addressed in order to prevent more serious decay from creeping in. Once the surrounding tree growth was cleared we focused on 2 kilns.

Kiln 1, We introduced a water shedding hydraulic lime capping to the top of the cylinder, all adjacent walls were pointed and the fire brick lining rebuilt. We superficially packed out a large movement crack to an depth of 2 inches where we introduced access/exit points for the hibernating Bats and rebuild areas of the corbeled stonework at the apex of the arch 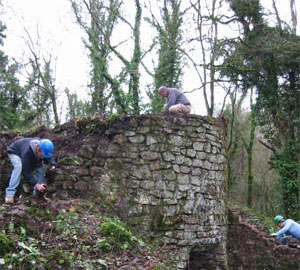 Kiln 2 Due to funding limitations we proposed to introduce a temporary water shedding terram (membrane) and turf capping to the top of the cylinder, although it would be more appropriate to repair and rebuild the top three courses as above along with all adjacent walls and to point & pack out the large movement crack in a similar bat friendly fashon, Areas of the corbeled stonework at the apex of the arch were rebuilt as well as the small collapsed area to the rear of the kiln.

Repointing & grouting was done using a suitable putty lime mortar guaged with a pozzolan (to achieve a quicker set) matched to the original & With Hydraulic lime used for surface capping In general it was recommended that stonework that has totally failed in a position that affected the weathering elements of the kilns be replaced. Voids within the mass of the walls for example were filled with a gravity injected Lime grout.