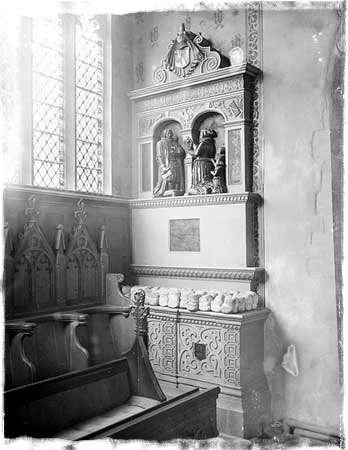 Minerva was recently comissioned to prepare a conservation report for the church of St. Nicholas in Abingdon which dates from some time before 1184. It was built by the monks of Abingdon Abbey, since it adjoinins the main entrance gate to their enclave, it served the laymen of the monastery: servants, tenants and visitors.

St. Edmund of Abingdon worshipped here as a child, along with his sisters, the Blessed Alice & Margaret Rich. Their mother was buried in the church, as commemorated by a modern plaque, before her body was removed to the The Chapel of St. Edmunds Mother (officially dedicated to Holy Cross, St. Edmund & St. Guthlac) in the Abbey cemetery, where the monks could better control the flow of pilgrims.

Inside there is a good renaissance style monument to John and Jane Blacknell in a small chapel on the north of the building. They both died on the same day in 1625, presumably of the plague. No wonder it was not constructed until over fifty years later. John was the grandson of the man who purchased the old abbey buildings after the dissolution of the Monasteries. His charity is still administered today and contributes greatly to the upkeep of the church.

With this in mind the parish asked us to prepare a condition report for the monument and our recommendations were accepted by the local diocesian advisory committee. We will begin the practical phase of works this winter; removing corroding victorian ironwork, poulticing to remove soluble salts, reordering some of the recent decoration to the figures and repairing the stonework.

The photo taken in 1896 shows loaves of bread on the table top of the monument.