(Above) rectifying damage to balustrading. 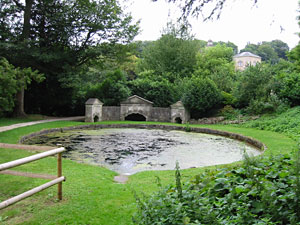 In 2007 Minerva completed a programme of works at The National Trust's Prior Park Landscape Gardens in Bath. Minerva were the principle stonework contractors for the conservation of the Cascade and Serpentine Lake.

Prior Park Landscape Garden is an 18th-century landscape garden, designed by the poet Alexander Pope and the landscape gardener Capability Brown. The garden was influential in defining the style of garden known as the "English garden" in continental Europe.

Prior Park was created by local entrepreneur and philanthropist Ralph Allen from about 1734 until his death in 1764, with advice from both Pope and Brown. Allen became mayor of Bath in 1742, having started off working in the post office. Much of the "Bath stone" so prevalent in Bath came from Allen's limestone Combe Down and Bathampton Down Mines. In around 1742, Allen commissioned architect John Wood to build a mansion within the park, which is now owned by Prior Park College.

The 28 acre landscape garden is set in a dramatic site running down a small steep valley, with fine views of the city of Bath. Its many interesting features include a Palladian bridge, Gothic temple, gravel cabinet, Mrs Allen's Grotto, three lakes a cascade and a serpentine lake. Minerva undertook the conservation of the cascade and large scale rebuilding work to the Serpentine lake, looking across the Bath skyline from Prior Park, one can see the tower of St Stephens church, Lansdown, this was another major project undertaken by Minerva at the same time (completed summer 2007).