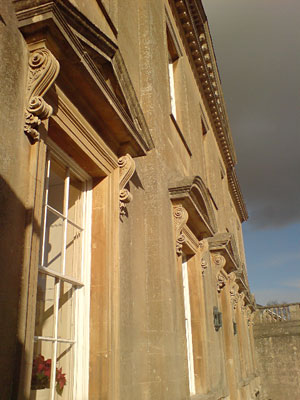 This is a Grade I Listed Building. Built 1762-5 by Stiff Leadbetter for Joseph Langton. It is Bath stone ashlar, hipped and mansard slate roof behind balustraded parapet and dentilled cornice to centre block, hipped roofs behind blocking course and moulded cornice to service wings, ashlar stacks.

The house plan consists of a central block linked by quadrant arcades, which curve forward to identical service ranges. Central block 2 storeys on a basement and with attics in dormers. 2:3:2 bays, the central 3 project slightly and are surmounted by a pediment which has a Diocletian window in the tympanum. Glazing bar sash windows in moulded architraves, the ground floor windows are surmounted by alternate triangular and segmental pediments, which are surmounted on consoles, continuous cill band.

Central panelled door in moulded architrave and under a pediment on consoles.The west and north elevations of the main block are similar to the entrance front but have full height canted bays to the centre and pediments over the central windows only.

Pevsner (The Buildings of England North Somerset page 234) describing the Mansion says that This is one of the finest country mansions of the 18th century in Somerset. 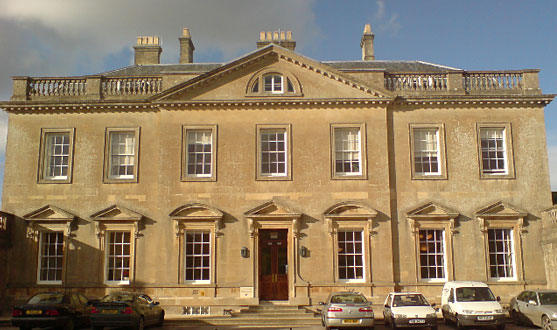 Extent and aims of the work

The primary purpose of these works was to repair the fabric of the main block to exclude rainwater and to prevent future failures due to rusting ferrous cramps. Some of the cramps were removed in an earlier intervention (date not known) and the aim was to remove the remaining cramps that appear to have been built in at both ground and first floor level. In addition there was a need for a considerable amount of repointing and sundry repair work to be undertaken and repairs to the external joinery, rainwater goods and soil pipes. A new Lightning protection scheme was provided.

Below: before and after pictures. 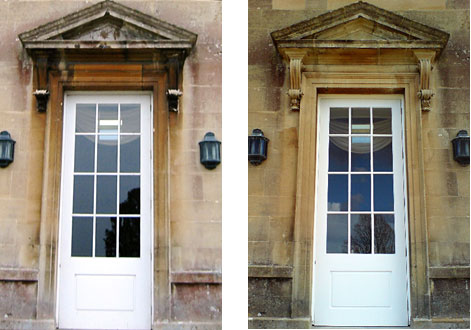