Tales From The Riverbank 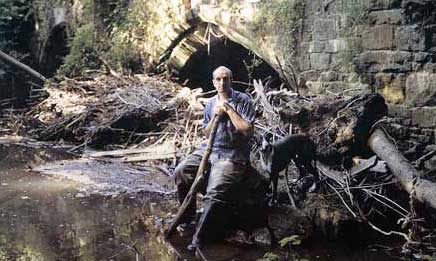 In the summer of 2003 a simple stone bridge over the Wiltshire Avon shared some of its secrets, 600 years ago one could journey from the Hindu kush via mainland Europe to plantaganet England crossing rivers by stone packhorse bridge designed & constructed from the same pattern book as used in rural Wiltshire.

The bridge forms part of a astonishing wider complex of buildings, with its famous tithe barn and associated agricultural buildings, Barton Farm Grange formed part of a great estate owned by the powerful Abbess of Shaftesbury which spread across much of the west country. The bridge is approached from the nearby Cotswold scarp with its cornbrash geological formation (which is particularly suitable for growing cereals as the small, easily frost fractured stones near the surface provide shelter for germinating seedlings).

The Abbess would have collected a tithe or a proportion of cereal from her tenants to fund the church and this grain would have been collected, processed and stored at the newly built tithe barn. It is illustrative that the quantities of grain being collected & carried would have been so large that in bypassing the existing town bridge (with its toll levied by the local corporation) a considerable cost saving would have been anticipated even after the huge expenditure of building a new bridge (although the Abbess did own the local quarries & land). The bridge spans the river with four pointed arches. Three cutwaters were added to the upstream side in the 15th century and railings added in the19th century. 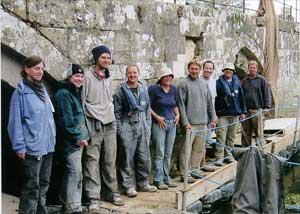 By 2003 The bridge was getting rather tired and in need of some care & repair. The company which I run with my partner Andrew Sharland, Minerva Conservation, was awarded the contract for works, church repairs are our staple however we do enjoy the additional challenge of maintaining our conservative philosophy on structures as environmentally akward as this.

The structure was exclusively used by pedestrians so Wiltshire County Council were able to adopt a more hands off approach than it usually would toward bridges carrying vehicular traffic. As is usual with projects of this nature previous inappropriate attempts at renovation had to be undone. Using an surprisingly stable pontoon system we Peeled back the layers one by one, removing areas badly damaged and jacked up by tree root growth, poor quality stonework & inappropriate modern materials previously fixed by contractors in the 1970s from a rubber dingy, (yes, its true ive seen the photos).

We also removed the cracked Tarmac carriageway and dismantled the cutwaters, again to remove trees! Having previously worked extensively on the adjacent C18 Kennet & Avon Canal it was a surprise to see many similarities in construction, Why bother using lime mortars as a bedding & packing material when abundant locally sourced clay would suffice? It is waterproof, works well in compression,

Much original stonework survived in the arches as was evident by the adze marks left by the masons who had quarried the stone only a couple of hundred yards away, The fixing of the replacement stone in the barrel vaults could only commence once the resident Daubentons Bat (also known as water or fishing bats) maternity roost and their fledged young had been temporarily moved on to the surrounding poplar trees.

Consecutive long evenings were spent on the pontoon with the local bat expert while he sealed roost holes & cracks (once the little critters had left to hunt for the night) this attracted the local drunks & constabulary in equal measure and ensured a regular food supply for the local invertebrates.

Night was when the river really came alive, a primeval soup of midges that appeared at night lived just above the river & kept the large bat population well fed, by day squadrons of damsen & dragonflies along with the odd kingfisher would alight on the pontoon. Roosts were recreated within the fabric of the arches and batboxes were created within large lumps of ashlar which have now been successfully colonised.

Temporary formwork in the barrel vaults supported stones adjacent to replacement elements. Limpley Stoke Ground limestone was found to be a ideal match & was cut, dressed & fixed by colleagues with whom we had worked at our time at Salisbury Cathedral. The bridge was repointed & grouted using a naturally hydraulic lime mortar (NHL5), a Cotswold limestone Thames aggregate from Moreton Cullimore created a satisfying and texturally pleasing mortar, it wasvital that we used a heavy duty mortar which could be guaranteed to have achieved a set properly before the winter with its frost & floodwaters which regularly rise above the bridge handrails.

Research into past surface materials of the carriageway suggested that it was originally paved with crushed limestone which was replaced with stone setts in the 19th century. The tarmacadam surface which was put on in the 1940's was replaced with hydraulic lime concrete. This has created a hard, durable surface which nevertheless allows evaporation of trapped water in the bridge after it becomes saturated. The new carriageway is also cambered to allow rainwater to run off via new Forest Marble cobbled gullies. The railings are recognised as a good example of 19th century rural craftsmanship and are in harmony with the original stonework. A new wrought iron handrail was made and fitted on the upstream side, the railings were left unpainted to allow the natural patina of the wrought iron to develop 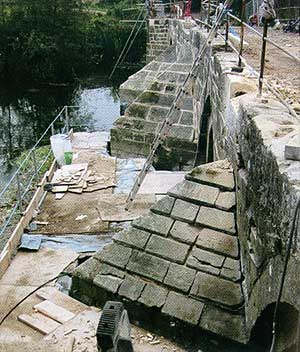 In one of the Valleys feeding into the basin of the river Avon rolls the mells river, its choc a bloc full of interesting structures that have quietly survived here from the industrial revolution.The aggregates levy fund has enabled us (working with volunteers and the Somerset Industrial Archaeological society ) to begin to conserve some of these monuments, last winter for example we begun worksto protect some Lime kilns.

We will soon be undertaking some basic structural repairs to the voussiors & Cutwaters of the lonely & now rather sad Murtrys Aqueduct of the long defunct & uncompleted Dorset & Somerset Canal which was planned to connect the Bristol and English Channels from Bath to Poole, via Wincanton & Frome, it dates from 1796 and was planned to to carry coal and the locally produced products of Fussell's Iron and edged Tools over the Mells River.

A few hundred yards down strean sits Murtrys Packhorse bridge, essentially C14. two of the original three slightly pointed ribbed arches, remain, the bridge was widened in 1817 but became obsolete when the railway constructed a new bridge in about 1854. Sucessive winters are now taking their toll and recent temporary protective works are being washed away. It awaits further funding.

Another blessed business is bridges to make
In places uncrossable after great showers
what a pity to pull a dead body out of a lake
Who was baptised in a stone font, a fellow of ours

Barton Farm Bridge as it is today.