This winter we have been working to consolidate the vulnerable ruined landscape of the Clarendon Palace, nr Salisbury, Wiltshire. Although the conditions were particularly cold and harsh, our extensive lime mortar repairs and pointing suffered only minor failure. Turf cappings were introduced to protect the core of the flint walls and have proven to be an effective method of conserving the ruins.

The current custodians on a visit..

The Medieval manor and hunting lodge was established during C12 as a Royal Palace and expanded during early C13. It has an irregular layout of buildings arranged around a courtyard. In 1574 it was described as a simple hunting lodge. In that year, Queen Elizabeth visited the site, but the buildings were in such poor condition that she had to dine in a temporary "banquett house" The ruination has continued ever since. Today, what survives of the royal residence used by kings and queens from Henry I to Henry VI are extensive earthworks, flint walls, and the eastern wall of the Great Hall.

We have been working under the instruction of the Architect and SPAB Scholar Jo Hibbert to consolidate and rebuild the remaining flint and walls and the scraps of historic plaster that remain. The ruins will be completed with new turf cappings to the wall heads.

The hard capping (wall tops constructed from stone and mortar) had failed, so working with volunteers, SPAB Scholars and the projects funders (English heritage) a soft turf capping was introduced.

It was really good to learn about the site from a fellow Antiquarian, Professor Tom Beaumont James FSA who had conducted excavations here in the 1980s.

Over the summer of 2017 we have been working on the early C18th quarry Bridge across the River Nadder at Chicksgrove near Tisbury.

Working with Sam Wheeler at Phillip Hughes Associates, the project combined both traditional masonry techniques as well as Lime grouting, pinning and a palette of mortar repairs to match both the colour of the stone and the lichens that cover it.

With the inclusion of a large Ammonite fossil that had been originally built in.

Newly fixed Chicksgrove stone from the adjacent quarry- ready to be trimmed in, dressed and finished.

Newly fixed Chicksgrove stone from the adjacent quarry - trimmed in, dressed and finished.

Our big project for the first part of 2017 was one of stonework repair to the Perpendicular church tower of Hinton St George, Somerset.

This was a pure conservation project that followed all aspects of lime repair to the walling stonework, windows filled with Somerset tracery and the grotesques and gargoyles. The project was overseen by the architect, John Beauchamp. All involved were very happy with how we captured the colour and texture of the Hamstone and Yeovil stone.

Below, Nell finishing repairs to the upper window tracery.

The slow reveal as the scaffolding was dropped in stages.

Below, repaired quatrefoil panels to the crenulations.

Grotesques after a shower.

Tracery prior to the insertion of micro pins to secure delaminating Hamstone sections.

Scaffolding down, all finished.

One of the inhabitants - a long eared bat.

Fibonnacci sequenced spiral stair case that is no longer a watercourse in heavy weather.

Below - Before and after view of Cleaning and lime mortar repairs to a Talbot hunting dog, Mells.

It's been our pleasure to have spent the past couple of years working on and off on the old Zion Chapel in the middle of our home town of Frome. It has been converted successfully into the new Hubnub community centre, by Ed and Io - (the most perfect clients imaginable).

Our Frome based team of Samantha, Nell, Mike, Bryony, Orion, Seth and Peter all enjoyed the change of a walk into work.

1.The outer facade was coming apart due to water ingress, so after unpicking and extensive stone replacement it now has a bright future.

The biggest challenge was to save the vaulted ceiling above the organ. Inserting stainless steel fixings from beneath into the ceiling joists was the only option. We disguised the fixings with a gilded decoration of stars - which everyone loves and has added to the success of the conversion to the galleried interior. 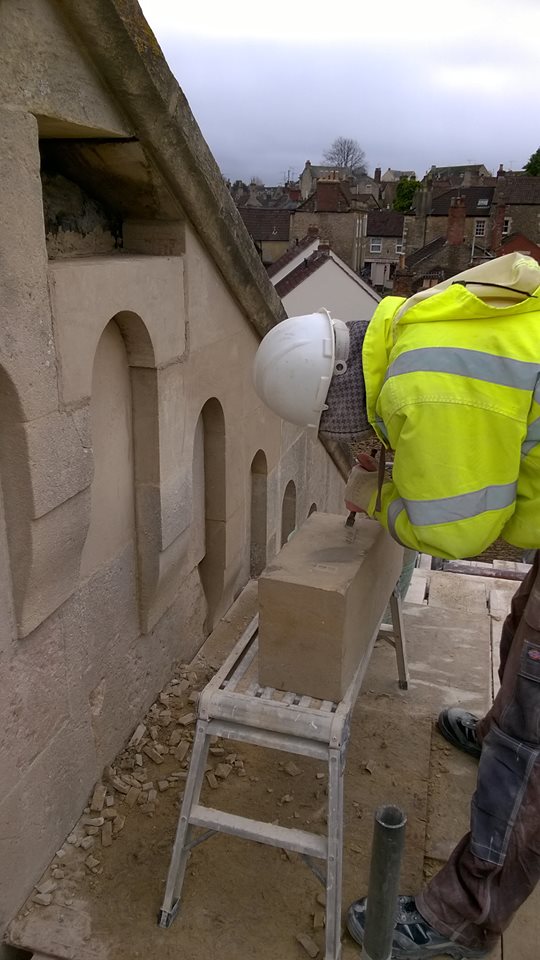 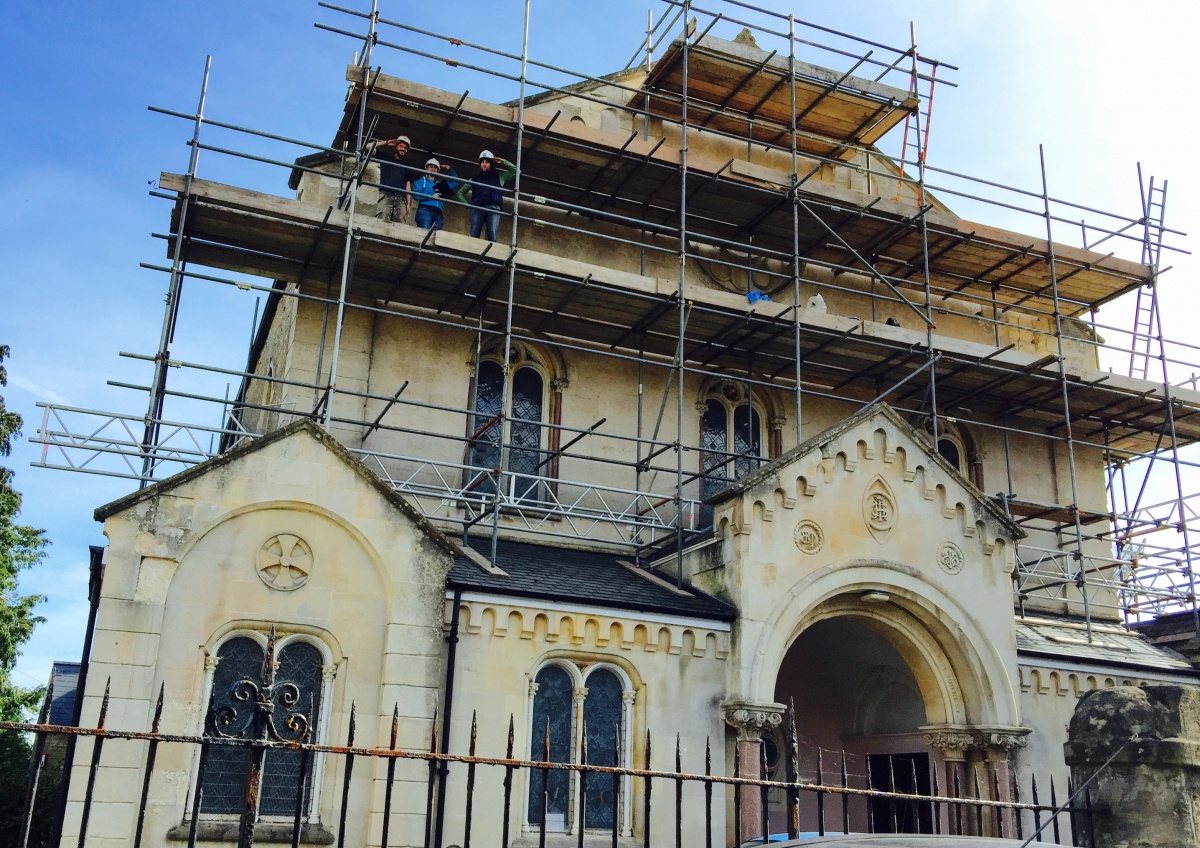 (Below) view of the Hubnub from the Lamb and Fountain.

We have been gearing up for next years early project on St George's four stage Church Tower at Hinton St George, Somerset. It is dated to 1485–95.

This will be a pure lime based conservation project with plenty of pointing and mortar repairs to match the Hamstone.

The tower is supported by full-height offset corner buttresses and has battlemented parapets with quatrefoil panels below merlons on the corner and intermediate pinnacles. The weathervane was added in 1756 by Thomas Bagley of Bridgwater. There is a hexagonal south-east corner stair turret. Stage 2 has small light on the north side and a statue niche on the south. All the faces on the two upper stages 2-light mullioned, transomed and traceried window under pointed arched labels, with pierced stone baffles. During earlier restoration work the parapet of the tower was examined and a stone was discovered with a carved date of 1731 which suggests that the decorative parapet may have been added then. The tracery on the north side has been marked out but never cut.

In general there is little sign of more than one phase of construction although repairs are evident.